The goal of this team is to provide mobile, wrap-around, empowerment-based intensive case management and clinical mental health services to government-assisted refugees in the GTA. The team has always demonstrated consistent commitment to the refugees they serve. However, since 2015, the team has surpassed everyone’s expectations. 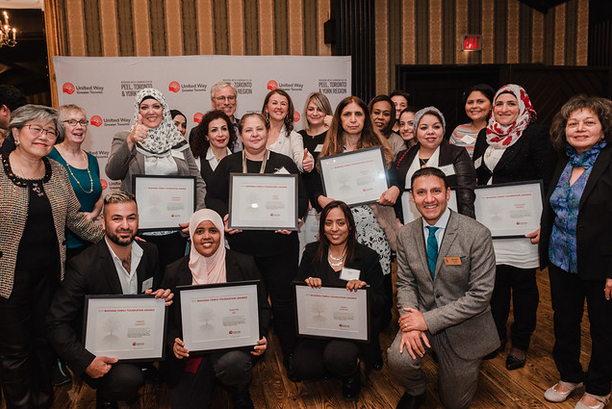 Between November 2015 and March 2016, over 2,000 Syrian refugees arrived and were placed in COSTI’s care — more than 2.5 times above target. The team grew exponentially and so too did their workload: a Mental Health Counselor came on board, caseloads grew to 120 families per staff member and the team quickly swelled to 36 staff. The team were champions – not only did they support each other’s work and morale, they welcomed new staff as if they were part of the family, and their open arms provided support to junior staff members.

The team was still serving the increased caseload of Syrian refugees when Yazidi clients began to arrive in February 2017. But nothing could have prepared them for the work that was ahead. The Yazidi refugees, who had just fled ISIS before coming to Canada, brought new challenges due to lack of available interpreters, the severity of the trauma they had endured, and special severe medical issues that Canadian doctors were at a loss to treat. Despite the challenges this team faced, they rallied, providing support to each other and our clients and partners. In the face of the seemingly insurmountable, this team is tops.