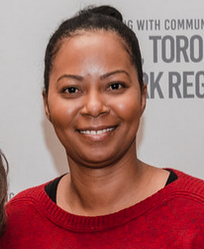 About 10,000 people in the Region of Peel access housing services each year and 75% of them are men. As Intake worker, Nealia works collaboratively with a variety of agencies across Peel to secure suitable housing for men experiencing homelessness because of mental health and addiction.

Nealia’s positive interactions with community partners make her a go-to source for social services providers. Her colleagues nominated her for her partnership with the Ontario Correctional Institute, supporting men who are leaving the institution with no housing plan. Research shows that the recidivism rate nearly doubles for men exiting institutions who have nowhere to live.

Because of Nealia’s leadership with the Ontario Correctional Institute, more than 18 men who would have otherwise been homeless after leaving prison have now transitioned to short-term and long-term housing. This has helped to reduce their potential to re-offend, resulting in safer communities across the Region.